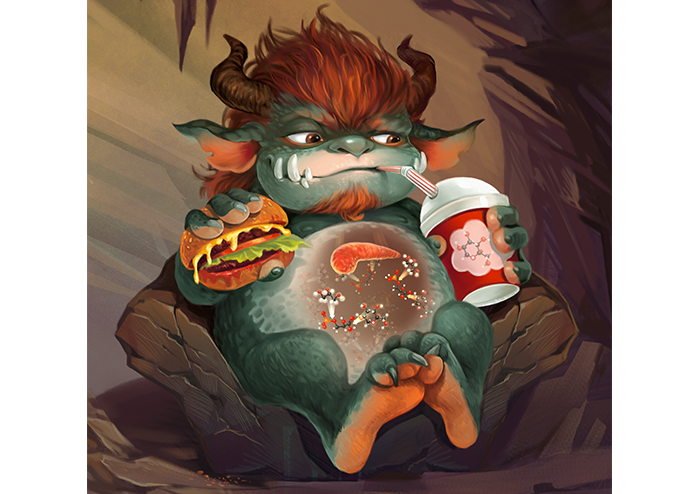 – Those who are habitually inclined to consume burgers, fries and soda may think twice about their dietary choices following scientists’ latest findings about high-fat, high-fructose diets.

As reported in their recent publication in Cell Metabolism, a collaborative team, led by Xiling Shen, Ph.D., Chief Scientific Officer at the Terasaki Institute for Biomedical Innovation (TIBI), discovered that a high-fat diet can increase fructose metabolism in the small intestine, leading to release of a fructose-specific metabolite called glycerate into circulation. Circulating glycerate can subsequently cause damage of the insulin-producing pancreatic beta cells, increasing the risk of glucose tolerance disorders, such as Type 2 diabetes mellitus (T2DM).

Although T2DM is typically found in older people, it has been occurring more and more in younger people. In the past two decades alone, T2DM has doubled in prevalence. Equally concerning are the health risks associated with T2DM, including heart disease and stroke.

In T2DM, there are insufficient levels of insulin, a hormone that regulates movement of glucose into peripheral cells; this usually occurs due to insulin resistance, a condition in which peripheral tissues do not respond normally to insulin and take in less glucose. To compensate for this, the pancreas overworks to secrete additional insulin, with eventual loss of this ability. The result is an unhealthy accumulation of glucose in the blood.

Further support for glycerate’s role in diabetes was obtained when the scientists examined information from patients with a rare disease called D-glycerate aciduria; these patients exhibit abnormally high levels of circulating glycerate. The team’s analysis revealed that this abnormality posed a significant and independent risk factor for diabetes among these patients. Additional experiments were conducted to test the effects of circulating glycerate and fructose given to normal and HFD mice. The results indicated that the observed glucose impairments in the glycerate-injected mice were due to a decrease in circulating insulin, rather than insulin resistance. Histologic data confirmed reduced numbers and elevated deaths of the insulin-producing beta cells in pancreatic islet regions in glycerate-injected mice, resulting in decreased levels of insulin.

Collectively, the scientists’ findings suggest that a prolonged exposure to high levels of glycerate due to excessive consumption of western diets rich in dietary fructose and fat poses the risk of damage to the pancreatic islet cells and development of diabetes.

“Elucidating the processes for metabolizing the foods that we eat is a crucial component in optimizing our nutritional health,” said Ali Khademhosseini, Ph.D., TIBI’s Director and CEO. “Understanding these processes also allows us to develop more targeted and personalized treatments for increasingly prevalent diseases like diabetes.”