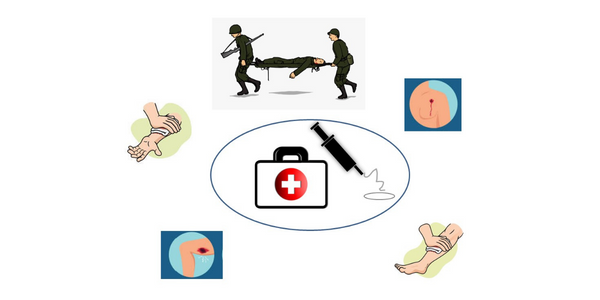 (LOS ANGELES) – As outlined in their recent publication in Biomaterials Science, researchers from the Terasaki Institute for Biomedical Innovation, (TIBI), have developed an injectable, temperature sensitive, shear-thinning hydrogel (T-STH) hemostat that works rapidly at body temperature to stop bleeding from a wound. This technology allows anyone to treat victims of traumatic injuries immediately and effectively. Once patient stability is achieved, the T-STH hemostat can easily be removed using a cold saline wash without leaving residues or causing re-bleeding of the wound. The saline wash also allows for removal of any debris lodged into the wound.

This treatment is applicable for any traumatic wound, but is especially relevant in treating battlefield wounds, as hemorrhage is the leading cause of potentially survivable deaths from trauma in the battlefield. In the battlefield, immediate access to medical care is delayed, and wounded soldiers are often vulnerable to excessive and often fatal severe blood loss (hemorrhage). It is therefore critical to immediately respond to wounded personnel by a simple method that can provide rapid and sustained hemorrhage control for a variety of wounds.

To date, there are many forms of commercially available hemostats, including sponges, powders, sheets, gauzes, and hydrogels, which exhibit effective hemorrhage control. But none of them, including the gold standard QuikClot Combat Gauze®, can provide fast, temperature-sensitive treatment of hemorrhage in a controllable manner.

“We need something simple, yet effective, that can be easily deployable on the battlefield,” commented Marvin Mecwan, Ph.D., a postdoctoral researcher at TIBI and the lead scientist of this project.

The team chose to use a polymer called poly(N-isopropyl acrylamide), due to its temperature-sensitive mechanical properties. Laponite, a blood coagulating agent, was added to impart the composite hydrogel with shear-thinning capabilities - the ability to deform under stress and quickly self-recover afterwards.

In initial experiments, an optimized T-STH formulation was produced, and it was demonstrated that the material could stop bleeding when subjected to quickly changing temperatures, such as during the treatment of traumatic wounds. After injection into the body, the T-STH becomes a solid, and hemorrhage-controlling material; when exposed to a cold saline wash, it changes to a soluble material that can easily be washed away. Furthermore, this formulation showed 50% reduced blood clot time over negative controls, was shown to be non-toxic, and degraded at rates favorable for short-term hemorrhage control.

The T-STH formulation was further tested in a laboratory model set up to mimic human blood flow. These experiments were conducted using human blood warmed to body temperature. Blood from simulated injuries were collected; the results showed that the T-STH was significantly able to reduce blood loss at the injury sites and form an effective plug against further bleeding at different blood flow rates.

These results were reproduced using mouse models with bleeding injuries; the T-STH exhibited clotting times and blood loss similar to that of a leading commercial hemostat, Floseal.

The TIBI team’s T-STH is an optimal choice for rapid, first-round treatment for any emergency or time-critical external injuries. In addition, there is a potential for improvement by the addition of faster coagulants, antibiotics for infection control, and molecules that promote tissue regeneration. In addition, there are possibilities for a sprayable version of the T-STH to treat lacerations and abrasions.

“The development of a temperature sensitive hemostat enhances the effectiveness and simplicity of immediate treatment for traumatic injury and has the potential to save many lives,” said Ali Khademhosseini, Ph.D., TIBI’s Director and CEO. “It is one of many ongoing and impactful research efforts from our biomaterials platform.”

This work was supported by funding from the National Institutes of Health (5R01HL137193) and the Terasaki Institute for Biomedical Innovation.