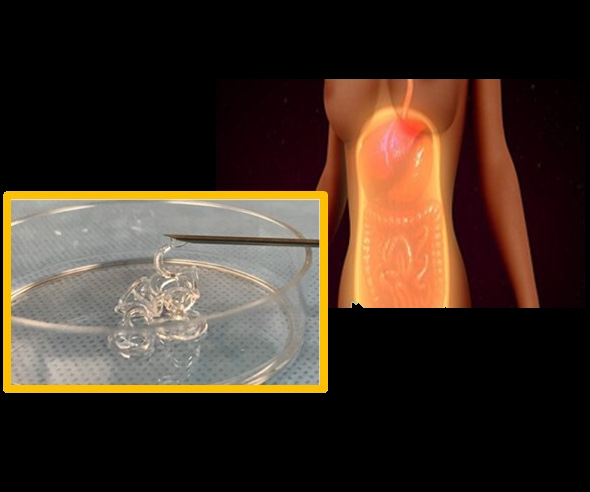 (LOS ANGELES)–Following surgery within the abdominal or pelvic cavities, scar tissue often forms on the inner linings of these cavities and may adhere to the organs which are found within them. This adhesion occurs in 93% of these patients and can affect the intestines, liver, urinary bladder, gall bladder and female reproductive organs. In up to 20% of adhesion cases, serious complications can arise, including chronic abdominal or pelvic pain, fertility problems or intestinal obstruction. This not only results in increased patient suffering and mortality but adds over $1 billion in additional hospital costs in the United States alone.

A commonly used method of combating this problem is to use commercially available synthetic films as adhesion barriers. However, there are sometimes difficulties in applying these films with a sufficient degree of conformity to irregular surfaces and they can also be fragile and difficult to handle. Additionally, it is not possible to use the films for small-portal procedures such as catheterization and laparoscopies, and their overall efficacy is estimated at 25%.

Through a multi-institute collaborative effort, which included scientists from Harvard University and the Terasaki Institute for Biomedical Innovation (TIBI), a method was developed to overcome these challenges and to produce a more effective anti-adhesion barrier with some added advantages.

The researchers first chose a polymer called a hydrogel which was made with silicate nanoplatelets (SNPs). This hydrogel was chosen due to its shear-thinning capabilities – the ability to deform under stress and then quickly self-recover and mold itself to fit the desired space. This made it ideal for injecting or for spraying onto a surface with complete and uniform coverage. The researchers were also able to formulate this shear-thinning hydrogel barrier (STHB) to solidify without the additional polymerization or crosslinking steps that other hydrogels require. To prevent the infiltration, adherence and growth of scar tissue producing cells, a polymer called polyethylene oxide (PEO), was included in the hydrogel mixture.

Extensive testing was performed on various formulations of the hydrogel to optimize its shear-thinning ability, injectability, spray characteristics and structural stability. Microscopic observation tests were also conducted to determine the effectiveness of PEO in preventing adherence of scar-producing cells. The results showed that the optimum formulations of the STHB demonstrated superior mechanical properties and more effective prevention of cell adherence than control hydrogels prepared without either SNPs or PEO.

Animal model and staining tests confirmed these initial results. Experiments were conducted on surgically injured rats using either an STHB or a commercial film barrier implanted onto their abdominal linings. After the standard postoperative time of two weeks, the resultant adhesions were visually inspected and graded. The optimum STHB formulation exhibited the highest effectiveness in preventing cellular adhesion over the film barrier or negative control (no barrier) treatments.

Subsequent experiments tested the STHB’s long-term biocompatibility; this is essential in obtaining normal post-surgical healing. The results showed that the STHBs produced no signs of immunological reactions against them after implantation and their degradation and resorption into the body was complete after a two-week period.

“By combining the best features of an optimized hydrogel barrier, we have created an effective way to prevent post-surgical adhesions,” Ali Khademhosseini, Ph.D., TIBI’s Director and CEO. “This is sure to have a great impact on surgical patients and the healthcare industry.”