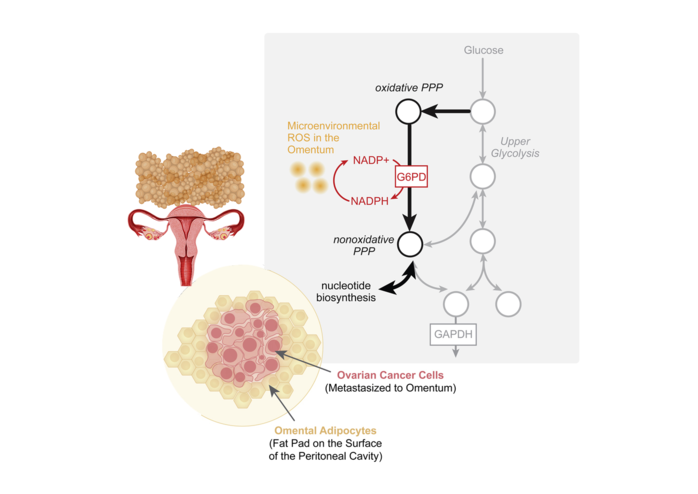 – In their recent publication in Cell Reports, a team of scientists, led by Xiling Shen, Ph.D., Chief Scientific Officer at the Terasaki Institute for Biomedical Innovation (TIBI), has demonstrated the pivotal role of an enzyme, glucose-6-phosphate dehydrogenase (G6PD), in facilitating ovarian cancer (OC) growth and metastasis in the omentum, a curtain of fatty tissue found in the abdominal cavity.

OC is a particularly deadly metastatic disease, with stage III or higher diagnoses occurring in 80% of patients, along with approximately 30% five-year survival rates. OC often shows a particular preference for migrating to and aggressively proliferating in the omentum, which provides fatty acids as a fuel source for OC cells.

As a part of this increase in fatty acid metabolism by the OC cells, certain oxidative compounds are produced, which impose a degree of oxidative stress in the omental microenvironment. As a result, a metabolic pathway called the pentose phosphate pathway (PPP) is activated, which not only serves as a counteractive response to this stress but is also an essential part of certain metabolisms in cancer cells.

Although it is known that G6PD is the rate-controlling enzyme in the PPP, its effects on OC metastasis in the omentum had not been previously examined. Dr. Shen’s team has shed light on this question by conducting a series of revealing experiments.

Genetic and metabolic analyses revealed elevated levels of PPP oxidative compounds and metabolites, including G6PD, in the omental metastases compared to primary tumors in OC patients. Similar observations were made in mice injected with different OC cell lines and in OC cells or organoids cultured in media conditioned with omental tissue.

These initial experiments confirmed the OM OC cells’ PPP response to oxidative stress generated by omental fatty acid metabolism. The elevated levels of G6PD observed in these samples provided a link. Ensuing inhibition experiments definitively demonstrated G6PD’s influence on OM OC cells. Genetic silencing or pharmacological inhibition of G6PD induced significant cell death and increased levels of key oxidative compounds in the cells grown in omental conditioned media compared with the others. The results from these experiments illustrated the need for the presence of G6PD to activate the PPP in order to counteract the omental production of oxidative compounds.

This observation was further confirmed by in vivo studies in mice injected with genetically altered G6PD-inhibited OMC cells or treated with the G6PD-inhibiting drug, which resulted in much smaller metastatic tumors in the omentum.

Taken together, the results signify that G6PD is an essential component used to offset the oxidative stresses created from fatty acid metabolism by OC cells in the omentum. Without this enzyme, the PPP cannot function, and the metastatic cells succumb to the resultant buildup oxidative compounds.

“Elucidation of the metabolic interplay which influences tumor survival and metastasis increases the potential for targeted therapeutic development,” said Ali Khademhosseini, Ph.D., TIBI’s Director and CEO. “This work is a step in that direction and has significant clinical relevance for aggressively metastatic diseases like ovarian cancer.”