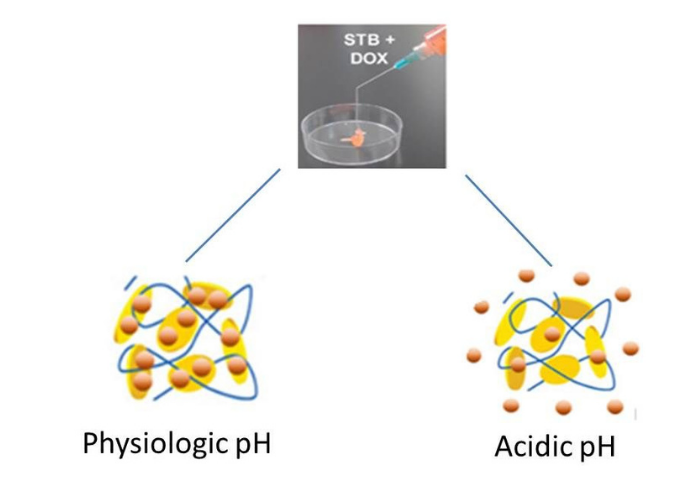 – In chemotherapeutic treatment of localized malignant tumors, it is desirable to administer targeted, controlled delivery of anti-tumor drugs. As these tumors are known to exist in an acidic environment, it is also desirable that these delivery methods be responsive to pH and that the drugs are released in a pH-dependent manner.

Localized drug delivery can be optimally obtained by the use of shear-thinning biomaterials (STBs) - biocompatible, injectable materials which have the ability to deform under stress and then quickly self-recover and mold themselves to fit the desired space. STBs can be administered easily and rapidly using clinical catheters and needles, they can provide targeted specificity and stability without fragmentation, and they are versatile enough to target various cancer types throughout the body.

Tunable, pH-responsive drug delivery may be imparted to such STBs by the addition of Laponite, a clay-based material made up of synthetic crystalline nanoparticles.

Indeed, previous studies have demonstrated the efficacy of using Laponite for pH-dependent release of doxorubicin (DOX), a chemotherapeutic drug commonly used to treat many types of cancer. However, since these studies were not conducted using STBs, the full advantage of STB usage was not realized.

In order to investigate pH responsiveness in DOX delivery using STBs, a collaborative team from the Terasaki Institute for Biomedical Innovation (TIBI) has conducted experiments which measured these capabilities, characterized the mechanical characteristics involved, and demonstrated their effect on malignant melanoma growth.

The team first prepared composite mixtures of STBs containing various ratios of gelatin and Laponite. They then loaded different amounts of DOX solutions into all the STB formulations. This was followed by in vitro and in vivo tests to measure the effects of DOX delivery on malignant melanoma cells and tumors by all the STB combinations.

Preliminary dialysis studies on the different DOX-loaded STB formulations were performed to examine their DOX-releasing profiles at different pHs.

Further in vitro tests were performed to measure DOX delivery and their effects when exposed to melanoma cell lines in culture.

In vivo tests were conducted by injecting the different STB formulations into mice with induced solid melanoma tumors. Measurements were taken of the resultant tumor sizes and mouse survival rates over time, and histological analyses of the tumor tissues were performed.

As a result of the various tests, the TIBI team was able to obtain an optimum STB formulation which exhibited the most highly controlled and sustained DOX release, specifically under acidic conditions. This STB also exhibited the best mechanical properties, with the least resistance to mechanical flow upon injection and the fastest recovery time.

Most importantly, results from the melanoma cell and tumor tests fully demonstrated the superior effects of the optimum STB’s drug delivery, with the highest levels of DOX-mediated growth inhibition and cell death observed.

“The work described here has resulted in a viable means of targeting localized tumors,” said TIBI Director and CEO, Ali Khademhosseini, Ph.D. It also provides valuable insight into factors influencing drug delivery systems, and can have far-reaching effects on many biomedical applications.”