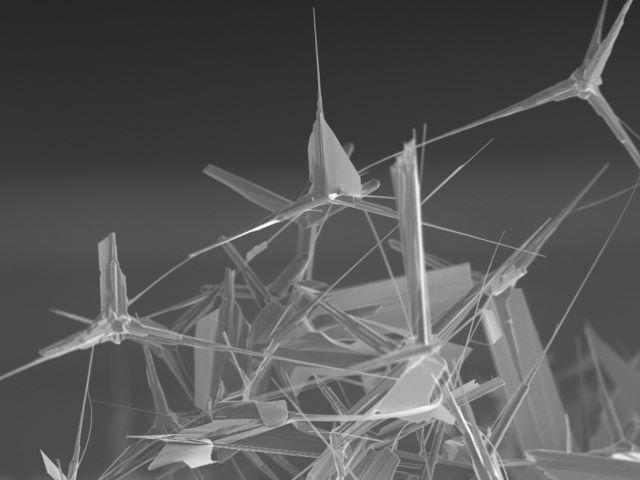 Fibrous material may be used as antiviral agent in garments, face coverings and bandages

(LOS ANGELES) – Billions of people around the world suffer from herpes simplex virus (HSV) infections; the severity of these infections range from no symptoms at all to fatal complications. There are two types of herpes viruses: HSV-1, which infects the eyes and oral cavity, and HSV-2, which infects the genitalia.

Current treatments include antiviral drugs which are either injected or applied topically as ointments; these drugs interfere with virus replication to keep their population in check. Other treatments are available such as vaccines, which stimulate antiviral immune responses, or immune response-modifying drugs.

Another approach involves a type of zinc oxide (ZnO) nanoparticles. ZnO nanparticles are spherically-shaped, commercially-available particles that are commonly found in sunscreen and cosmetics and they also exhibit antibacterial properties.

Previous studies have shown that a version of these particles, zinc oxide tetrapod nanoparticles (ZOTeN), can not only exhibit anti-microbial activity, but can also bind to HSV particles and work like a vaccine to stimulate an immune response against primary and secondary female genital herpes infections. In addition, ZOTeN were shown to have more biocompatibility than ZnO.

A multi-institute collaboration, which included the UCLA Department of Chemistry and Biochemistry, and the Terasaki Institute for Biomedical Innovation (TIBI) further explored the anti-microbial capabilities of ZOTeN by dispersing them in a mixture with a polymer called polycaprolactone (PCL); this produced a fibrous array resembling interwoven rose thorns. The theory behind creating this array was that the spiky structures provide catalytic surfaces on which water and oxygen would form hydrogen peroxide, an anti-viral agent.

The researchers applied this theory to propose that these thorns could be incorporated into non-woven garments or mask material as a preventative measure against HSV or other viral infections. They also conjectured that exposure of the fibrous arrays to light would speed the formation of hydrogen peroxide.

After producing a PCL/ZOTeN fibrous array, the researchers tested its structure and characteristics compared with samples of PCL alone. They confirmed that the the PCL/ZOTeN contained well-defined spikes, which protruded from the normal nanofiber structures of PCL alone; the density of these interwoven spikes increased with the addition of more ZOTeN. Furthermore, the charged states of the zinc in higher concentration ZOTeN formulations were optimum for antiviral and photo-reactive activity.

The researchers then set up experiments exposing the thorn-like PCL/ZOTeN surfaces to blue light and aerated (oxygen-containing) water as a means to stimulate photochemical production of hydrogen peroxide. The results from enzymatic and colorimetric tests indicated that the surfaces with high concentrations of ZOTeN spikes generated the most hydrogen peroxide, and zero production occurred for those without them. Further tests with and without blue light exposure demonstrated the light’s effectiveness in accelerating hydrogen peroxide generation.

Tests were also performed to test the ZOTeN composite’s biocompatibility by measuring viability and metabolic activity of fibroblast cells cultured in various formulations of ZoTeN. There were no changes observed in cells cultured for 1-3 days, but viability did decrease beyond that time period for the formulations with the highest concentrations of ZOTeN; this suggests an upper limit to the concentration of ZOTeN that may be used safely.

Finally, the team tested the ZOTeN fibrous arrays against the Herpes viruses themselves. The standard plaque assay to determine the quantity of replicating viruses was performed with the same controls and samples with various ZOTeN concentrations. The results showed that, for both virus subtypes, normal viral plaque formation was observed in samples without ZOTeN, and the number of plaques decreased in concentration-dependent fashion in the samples with ZOTeN.

Other tests were conducted to observe the effects of ZOTeN on HSV-1’s ability to replicate; this was accomplished by measuring the virus’ synthesis of mRNA and expression of a protein, glycoprotein B, which the virus normally generates when cultured with human corneal cells. The results showed that ZOTeN significantly reduced both these quantities, doing so in a concentration-dependent manner for the protein expression.

Similarly, fluorescent labeling to indicate replication of modified HSV-1 viruses was significantly reduced in a concentration-dependent manner when trapped in scaffolds with various levels of ZOTeN.

The results from the various in vitro tests demonstrate the effectiveness of using light-activated thorn-like scaffolds against HSV-1 and HSV-2 infection. Further experiments with animal models and clinical trials will be conducted, to strengthen the potential for using ZOTeN fibers as antiviral topical dressings and textiles.

“Structural and other parameters can play a big role in facilitating chemical reactions,” said Ali Khademhosseini, TIBI’s Director and CEO. “We have taken advantage of these properties to enhance antiviral activity against HSVs and possibly other similar viruses.”