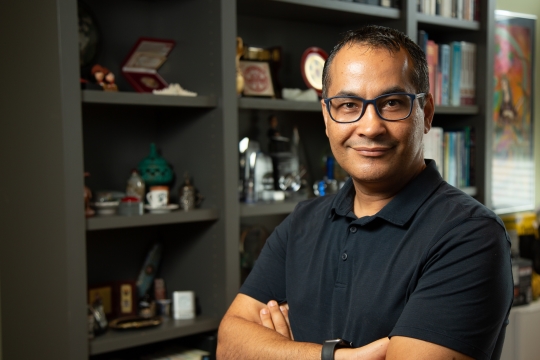 Ali Khademhosseini is the CEO of the Terasaki Institute for Biomedical Innovation. Formerly, he was Levi Knight Professor of Bioengineering, Chemical Engineering, and Radiology at the University of California-Los Angeles (UCLA). He was the Founding Director of the Center for Minimally Invasive Therapeutics at UCLA.

He joined UCLA starting from Nov. 2017 from Harvard University where he was a Professor at Harvard Medical School (HMS) and faculty at the Harvard-MIT’s Division of Health Sciences and Technology (HST), Brigham and Women’s Hospital (BWH) as well as an associate faculty at the Wyss Institute for Biologically Inspired Engineering. At Harvard University, he directed the Biomaterials Innovation Research Center (BIRC) a leading initiative in making engineered biomedical materials.

He is a leader in applying bioengineering solutions to precision medicine. His large and interdisciplinary group is interested in developing ‘personalized’ solutions that utilize micro- and nanoscale technologies to enable a range of therapies for organ failure, cardiovascular disease, and cancer. In enabling this vision, he works closely with clinicians (including interventional radiologists, cardiologists, and surgeons). For example, he has developed numerous techniques in controlling the behavior of patient-derived cells to engineer artificial tissues and cell-based therapies. He is also developing ‘organ-on-a-chip’ systems that aim to mimic human physiology and pathology to enable patient-specific evaluation of drug candidates. In addition, his laboratory is a leader in utilizing biofabrication to form vascularized tissues with appropriate microarchitectures as well as regulating stem cell differentiation in microengineered environments. He has also pioneered various high-performance biomaterials that can respond to each patient’s needs. He has edited multiple books/journal special issues and is an author on >650 peer-reviewed journal articles, editorials and review papers, >70 book chapters/edited books, and >20 patent/disclosure applications. His work has been published in leading journals and routinely highlighted in international media.  He has been cited >73,300 times and has an H-index of 139. Also, he has given over 250 invited seminars and keynote lectures. Annually for the past five years, he has been selected by Thomson Reuters as one of the World’s Most Influential Minds as a Highly Cited Researcher.

Dr. Khademhosseini’s interdisciplinary research has been recognized by over 60 major national and international awards. He is the recipient of the Presidential Early Career Award for Scientists and Engineers (PECASE), the highest honor given by the US government for early-career investigators. In 2007, he was named a TR35 recipient by the Technology Review Magazine as one of the world’s top young innovators. In 2011, he received the Pioneers of Miniaturization Prize from the Royal Society of Chemistry (RSC) for his contribution to microscale tissue engineering and microfluidics.  In 2016, he received the Sr. Scientist Award of Tissue Engineering and Regenerative Medicine Society-Americas (TERMIS-AM) and in 2017 he received the Clemson Award of the Society for Biomaterials. He is a fellow of the American Institute of Medical and Biological Engineering (AIMBE), Biomedical Engineering Society (BMES), Royal Society of Chemistry (RSC), Biomaterials Science and Engineering (FBSE), Materials Research Society (MRS), NANOSMAT Society, and American Association for the Advancement of Science (AAAS). He is also the recipient of the Mustafa Prize ($500,000 prize) as well as a member of the International Academy of Medical and Biological Engineering, Royal Society of Canada, and Canadian Academy of Engineering.

Dr. Khademhosseini is an Associate Editor for ACS Nano. Previously, he served as the Research Highlights editor for Lab on a Chip.  He is on the editorial boards of numerous journals including Small, RSC Advances, Advanced Healthcare Materials, Biomaterials Science, Journal of Tissue Engineering and Regenerative Medicine, Biomacromolecules, Reviews on Biomedical Engineering, Biomedical Materials, Journal of Biomaterials Science-Polymer Edition and Biofabrication. He received his Ph.D. in bioengineering from MIT (2005), and MASc (2001) and BASc (1999) degrees from the University of Toronto both in chemical engineering.